Home » Blog » From Inventor to Patient:

From Inventor to Patient:

Posted by: Aker Kasten Eye Center in Uncategorized on July 22, 2014 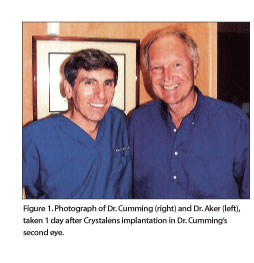 At age 72, I was a 3.00 D hyperope wearing soft contact lenses and using 2.50 D reading glasses. I had early cataracts; my BCVA was 20/25 in each eye with the contacts, blurring to 20/40 with the brightness acuity tester. The average age of my patients undergoing laser cataract surgery before I retired was 73 years old. As the cofounder of Eyeonics, Inc. (now part of Bausch & Lomb, Rochester, New York) – and at the time a full-time employee of the company – I was frequently asked, “As a 3.00 D hyperope, why haven’t you been implanted with the Crystalens?” I finally decided that I should put my eyes where my mouth was. 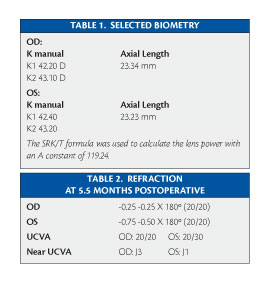 The next task was to carefully select the surgeon. I have many friends with whom I had been in surgery – all were excellent surgeons who wanted to operate on me. However, I was concerned that I might become part of their advertising campaign since it is legal to advertise as a physician in the United States. I had been in surgery several times with my good friend Alan B. Aker, MD (Figure 1), who practices at the Aker-Kasten Cataract & Laser Institute in Boca Raton, Florida. Not only is he an excellent surgeon, but he also does not advertise. I asked Dr. Aker if he would do my surgery, and he kindly agreed. At the time I decided to have surgery, I was visiting a number of surgeons who were implanting the Crystalens, and I took advantage of having my biometry done at three different centers. In late 2004, the IOLMaster (Carl Zeiss Meditec, Jena, Germany) was still undergoing fine tuning for its keratometry (K) readings. Therefore, I elected to have the axial length measured both by immersion ultrasound and the IOLMaster, with manual K readings. All readings were similar, and the chosen biometry was done in Dr. Aker’s practice on April 25, 2005 (Table 1). 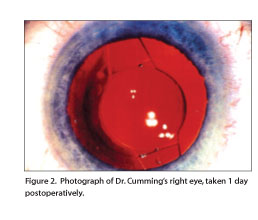 We selected lens powers of 23.00 D for the right eye and 23.50 D for the left nondominant eye so that the postoperative refractions would be plano and -0.50 D, respectively. I reported for surgery on April 27, 2005, for the first (left) eye. I was 72 years old. I was widely dilated with phenylephrine 10% plus cyclopentolate HCL 2%; topical anesthesia was given. The anesthetist then gave me a peribulbar block under sedation, and I underwent laser cataract surgery with a 6-mm capsulorrhexis. After phacoemulsification, Dr. Aker implanted the 23.50 D Crystalens AT45. I suggested to Dr. Aker that he use a scleral tunnel incision. In my experience, the immediate postoperative vision at 1 day and 1 week with a scleral tunnel is superior to that with clear corneal incisions. The scleral tunnel incision seals quickly, permanently, and with less risk of endophthalmitis. Dr. Aker implanted the second 23.00 D Crystalens AT45 in my right eye on May 4, 2005. Both surgeries were without complications. Atropine 1% was instilled the day of surgery and 1 day postoperatively (Figure 2). Dr. Aker’s office is extremely well organized and efficient. There was no feeling of apprehension prior to surgery due to the kindness and attention of his staff. I remember him seeing me before I was sedated; however, I do not remember anything after that until I was in recovery.
POSTOPERATIVE RESULTS
Immediately postoperatively, my pupil was widely dilated, and I found it difficult to drive at night because of the glare and halos. Fortunately, it appears that the effect of atropine in elderly patients significantly wears off in 3 to 4 days. After this time, I was free from glare, and the pupil was down to about 3 to 4 mm. By day 4 postoperatively of the second eye, I was seeing well in each eye without glare at night. My UCVA was 20/30 and J3 at 1 week postop in each eye. At 2 weeks, my BCVA was 20/20, and my UCVA in both eyes was 20/25 and J2. I had a vertical diplopia that was relieved by tilting my head down, which gradually improved over 4 weeks. I assume that the peribulbar injection penetrated the superior rectus. I am delighted with the results. My near vision gradually improved during the first 12 months. Now, most of the time I am without my 1.00 D reading glasses, which I wear only when I sit down to read for a prolonged period. The computer is also crystal clear without glasses. I am finally functioning 90% of the time without glasses or contact lenses. My vision is as you would expect it to be if I were 35 years old, and I can usually read the menu without glasses in a dimly lit restaurant. I have no loss of contrast and do not take my reading glasses to restaurants. There is no glare or halos, and I have never seen shadows of the edge of the 4.5 mm, 0.9 mm centrally thick optic, which is located deep in the eye, in the posterior part of the capsular bag. At my age, the bag is on average 5 mm deep. My refraction on September 28, 2005, at 5.5 months postop, is listed in Table 2. In late 2006, my near visual acuity was getting worse; however, my distance vision was still 20/20 in the right eye and 20/30 in the left eye without correction. I was visiting Harvey Carter, MD, at Carter Eye Center in Dallas, and after examining me he suggested I should have a posterior capsulotomy in both eyes, which he performed the same day. My near UCVA immediately returned to J3 and J1 in my right and left eyes, respectively. I play golf, and in my foursomes there are usually eight Crystalens eyes keeping their eyes on the ball and marking their cards without glasses. Like me, they are all happy with their vision.